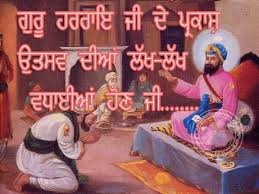 The seventh Guru of the Sikh faith, was the son of Baba Gurditta and grandson of Guru Hargobind, Nanak VI. He was born on 31 January 1630 at Kiratpur, in present-day Ropar district of the Punjab. In 1640, he was married to Sulakkhani, daughter of Daya Ram of Anupshahr, in Bulandshahr district of Uttar Pradesh. He was gentle by nature and had a devout temperament.

He was Guru Hargobind's favourite grandchild, and he had been given the name of Har Rai by the Guru himself. Once, record old texts, Har Rai was returning home after his riding exercise. From a distance he saw Guru Hargobind sitting in the garden. He at once got off his horse to go and do him homage.In this hurry, his robe was caught in a bush and a few of the flowers were broken from their stems. This pained Har Rai's heart. He sat down on the spot and wept bitterly. Guru Hargobind came and consoled him. He also advised him: "Wear your robe by all means, but be careful as you walk. It behoves God's servants to be tender to all things." There was a deeper meaning in the Guru's words. One must live in this world, and yet be master of oneself. 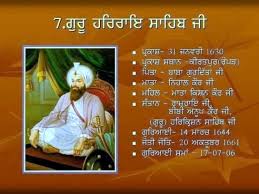 Guru Har Rai Ji (31 January 1630 - 20 October 1661) was the seventh of the Ten Gurus of Sikhism and became Guru onTuesday, 19 March 1644 following in the footsteps of his grandfather, Guru Har Gobind Ji. Before Guru Ji died, he nominated Guru Har Krishan Ji, his son as the next Guru of the Sikhs. The following is a summary of the main highlights of Guru Ji life:
The Guru nominated his youngest son, the five year old Har Krishan as the Eighth Sikh Guru; Guru Har Krishan Sahib on Sunday, 20 October 1661.
Guru Har Rai Ji also visited Lahore, Sialkot, Pathankot, Samba, Ramgarh and many places of Jammu and Kashmir region. He established 360 Sikh missionary seats (Manjis). He also tried to improve the old corrupt Masand system and appointed pious and committed personalities like Suthre Shah, Sahiba, Sangtia, Mian Sahib, Bhagat Bhagwan, Bahagat Mal and Jeet Mal Bhagat (also known as Bairagi), as the heads of Manjis.
Suthre Shah was born in sampat 1672, in the village of Berampur in the house of Nanda Khatri. He was born with a full set of teeth, his father after consulting the pundits and astrologers, placed the child outside the house, leaving him to and uncertain fate (most likely death), but it just so happened that Sri Guru Hargobind Sahib ji, on his way back from Kashmir, saw the abandoned infant and took pity on him and he order his sikhs to carry the child with them, it was Guru Hargobind sahib ji who named the child 'Suthra'.
Guru Har Rai Sahib faced some serious difficulties during the period of his guruship. The corrupt massands, Dhir Mals and Minas always tried to preclude the advancement of the Sikh religion.

One day the Sikhs asked the Guru whether those who read the Gurus' hymns without understanding them derived any spiritual advantage from it. The Guru gave no reply at the time, and next morning went hunting. En route, the Guru came across a broken pot which had held butter. The rays of the sun were melting the butter on the broken pot fragments. The Guru took one of these fragments in his hand and said, "Look my Sikhs, broken pot shards - when they are heated, the butter that adhered to them readily melts. As the grease adheres to the potshards, so to do the Gurus' hymns to the hearts of his Sikhs. At the hour of death the Gurus' instruction shall assuredly bear fruit. Whether understood or not, it has within it the seed of salvation. Perfume still clings to a broken vase." The meaning of the parable is that whoseoever daily reads the Gurus shabads shall assuredly obtain peace. And even though he may not fully understand them, God will undoubtedly assist him.
Guru Ram Das has said: "The Word is the Guru, and the Guru in the Word, and in the Word is the essence of ambrosia."
Posted by Unknown at 11:01 PM