Guru Ka Lahore is a cluster of three Gurdwaras near Basantgarh village in Bilaspur district of Himachal Pradesh, about 12 kilometers north of Anandpur Sahib in Punjab, which are located at the site of Guru Gobind Singh's marriage. A fourth Gurdwara at the spot which played a part in the wedding is located about a Kilometer away.
In keeping with Panjabi tradition the betrothal of young Gobind Rai had taken place during the lifetime of his father Guru Tegh Bahadur, but the marriage had been postponed because of the elder Guru's martyrdom in November 1675. Early in 1677, Jito Ji's father, Bhai Hari Jas, a resident of Lahore, came to Chakk Nannki (later Anandpur Sahib) and proposed that the bridegroom's marriage party should go to Lahore with the marriage being performed at an early and suitable date.
The elders in the holy family considered that it was still not politically advisable to go to Lahore as People at Lahore was against Guru Ghar since first Guru. In Gurbani Guru Nanak Sahib said ਲਾਹੌਰ ਸਹਰ੝ ਜਹਰ੝ ਕਹਰ੝ ਸਵਾ ਪਹਰ੝ ॥੨੭॥. Most of people who stood against Sikhi were Lahoris. Guru Amar Dass also repeated same thing in his bani.
The young Guru said, we shall create a 'Lahore' here. The bride's family may come and reside in it, and the marriage may take place as agreed. Consequently, a temporary camp was set up near Basantgarh to look like part of Lahore. The site was called Guru Ka Lahore. Bhai Hari Jas brought his family and relations to the temporary 'Lahore' and the marriage took place on 23rd Har 1734 Bikrami/21st June 1677. Even after the camp had been closed down and diassembled, the place continued to be considered holy. A Gurdwara was established at the camp site to which two more were added later close to some nearby springs. 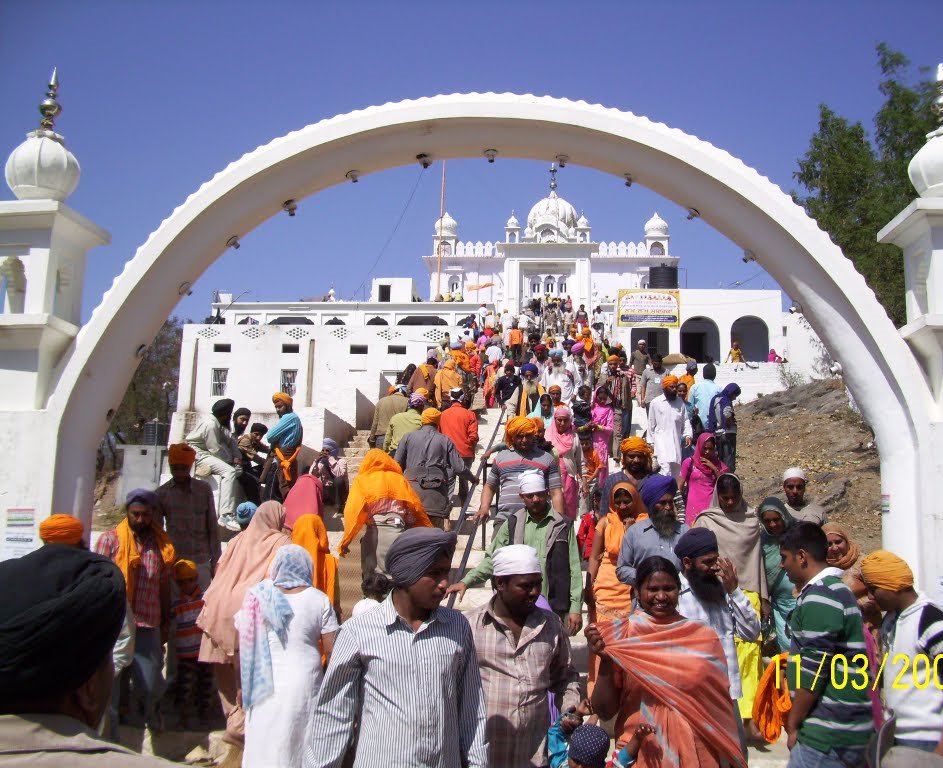 1) Gurdwara Anand Karaj Sthan Patshahi Dasvin - represents the spot where the marriage was performed. Its present building, a square hall with the domed sanctum over its middle, was constructed by Sant Seva Singh Anandgarhwale during the 1960s.
2) Gurdwara Triveni Sahib - enclosing a spring formerly called Karpa (lit. spear) Baoli was created, according to popular legend, by the Guru with a blow of his spear. It is a domed square hall with a pavilion over the spring in front of the hall.
3) Gurdwara Paur Sahib - a small domed room with a verandah in front, near another spring is also based on a legend similar to the one related to Triveni Sahib. In this case the spring is said to have been caused by the Guru's horse stamping its paur (hoof).
Gurdwara Sehra Sahib - One kilometer south of Guru ka Lahore in Bilaspur is located at the spot where Guru Gobind Singh halted for a short time on his way to his marriage at Guru ka Lahore. According to tradition the Guru donned his sehra (bridegroom's floral headband) here. The Gurdwara, a square domed room with a circumambulatory verandah, was constructed by Sant Seva Singh of Anandpur Sahib in 1962.
Posted by Unknown at 4:02 AM