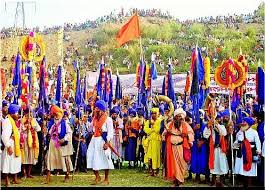 The Hola Mahalla was originated by Guru Gobind Singh, the tenth Sikh Guru. The Guru was in the midst of fighting both Aurangzeb of the Mughal Empire and the Hill Rajputs, and had recently established the Khalsa Panth. On February 22, 1701, Guru Gobind Singh started a new tradition by overseeing a day of mock battles and poetry contests at Holgarh Fort. The tradition has since spread from the town of Anandpur Sahib to nearby Kiratpur Sahib and the foothills of the Shivaliks, and to other Gurdwaras around the world.

Hola Mahalla or simply Hola is a Sikh event, which takes place on the first of the lunar month of Chet, which usually falls in March.
Mahalia, derived from the Arabic root hal (alighting, descending), is a Punjabi word that implies an organized procession in the form of an army column accompanied by war drums and standard-bearers, and proceeding to a given location or moving in state from one place to another. 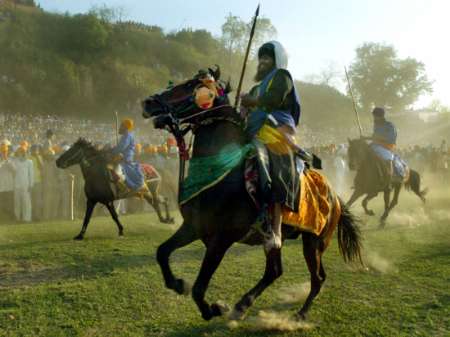 This custom originated in the time of and by Guru Gobind Singh (1666–1708) who held the first march at Anandpur on Chet vadi 1, 1757 Bk (22 February 1701). Holi, when people playfully sprinkle colored powders, dry or mixed in water, on each other the Guru made Hola Mahalla an occasion for the Sikhs to demonstrate their martial skills in simulated battles. This was probably done forestalling a grimmer struggle against the imperial power and channelizing the energy of folks to a more useful activity. Hola Mahalla became an annual event held in an open ground near Holgarh, a Fort across the rivulet Charan Ganga, northwest of Anandpur sahib.