Have a Majestic and Inspiring Baisakhi!‏ 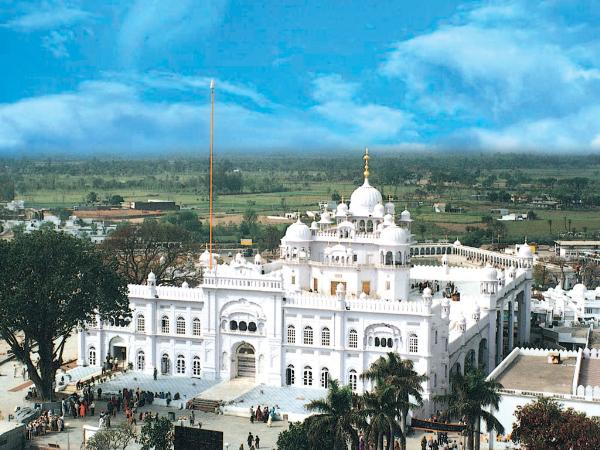 Baisakhi (Punjabi: ਵਿਸਾਖੀ) visākhī), also known as Baisakhi, Vaishakhi, or Vasakhi) is a festival celebrated in the Punjab region. The festival coincides with other festivals celebrated on the first day of Vaisakh.
Vaisakhi is especially important for the Sikh community as it marks the establishment of the Khalsa. More recently, this festival is also celebrated around the world by the Sikh diaspora.
The festival is also celebrated by Hindus and Buddhists for different reasons including the start of a new year. People in the Punjab Region regard Vaisakhi as a harvest festival and
the Punjabi new year. 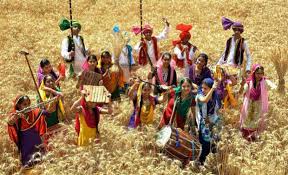 Vaisakhi is usually celebrated on 13 April, and occasionally on 14 April, in the different regions across the world as the Sikhs migrated overseas.
The festival bears a great significance for Sikhs due to the fact that on the Vaisakhi Day in the year 1699, the 10th Guru of the Sikhs, Guru Gobind Singh laid down the foundation of the Panth Khalsa, that is the Order of the Pure Ones. It is also used as a celebration for those accepting the five Ks. 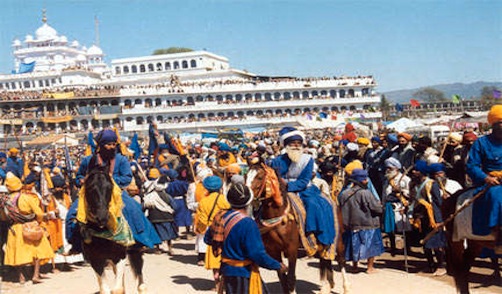 To mark the celebrations, Sikh devotees generally attend the Gurdwara before dawn with flowers and offerings in hands. Processions through towns are also common.
Formation of Khalsa Panth: 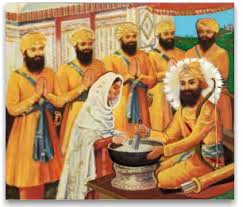 The Khalsa (Punjabi: ਖ਼ਾਲਸਾ; is the collective body of all initiated Sikhs represented by the five beloved-ones and can be called the Guru Panth, the embodiment of the Guru and the final temporal Guru/leader of the Sikhs. The word Khalsa translates to "Sovereign/Free". Another interpretation is that of being "Pure/Genuine.” The Khalsa was inaugurated on March 30, 1699, by Guru Gobind Singh, the tenth Sikh Guru. From then on the temporal leadership of the Sikhs was passed on to the Khalsa with the bestowed title of "Guru Panth" and spiritual leadership was passed on to the Guru Granth Sahib with the Khalsa being responsible for all executive, military and civil authority in the Sikh society. The Khalsa is also called the nation of the Sikhs.
The Sikhs of the Khalsa can be identified with the given Five Ks and titles of Singh and Kaur which are gained after the disciple is being baptized into the order of the Khalsa. The tenth Sikh Guru, Guru Gobind Singh at an event that coincided with the Vaisakhi day (of the new lunar month Baisakh Samvat 1756) created the Khalsa in the year 1699 A.D at Kesgarh, inAnandpur Sahib ordained that every Sikh becomes Amritdhari “[Having taken Amrit]” and follow the Five Ks; which are not merely symbols but display commitment to the philosophy of Guru Nanak Dev like a uniform of an organization.
A Sikh male at being initiated into the Khalsa is titled Singh meaning “Lion” and a female is entitled Kaur meaning “Princess”. From then on they are commonly referred to as Amritdhari (having taken Amrit).
The Khalsa is considered the pinnacle of Sikhism.[9] The Khalsa is expected to perform no ritual and to believe in no superstition of any kind but only believe in one God who is the Master and the Protector of all, the only Creator and Destroyer.[10]

Although the early Mughal emperors had peaceful relations with the Sikh Gurus, the Sikhs started facing religious persecution during the reign of Jahangir. Persecution against the Sikhs continued until the creation of the Sikh Kingdom in 1799. Guru Arjan Dev, the fifth Guru, was arrested and executed by Emperor Jahangir in 1606. The following Guru, Guru Hargobind formally militarized the Sikhs and emphasized the complementary nature of the temporal power and spiritual power.
In 1675, Guru Tegh Bahadur, the ninth Guru of the Sikhs was executed by the Mughal emperor Aurangzeb for saving the religious rights of Hindus. In 1699, his son and the tenth Guru, Gobind Singh sent hukmanamas (letters of authority) to his followers throughout the Indian sub-continent, asking them to gather at Anandpur Sahib on March 31, 1699, the day of Vaisakhi (the annual harvest festival).
Guru Gobind Singh addressed the congregation from the entryway of a tent pitched on a hill (now called Kesgarh Sahib). He drew his sword and asked for a volunteer who was willing to sacrifice his head. No one answered his first call, nor the second call, but on the third invitation, a person called Daya Ram (later known as Bhai Daya Singh) came forward and offered his head to the Guru. Guru Gobind Singh took the volunteer inside the tent, and emerged shortly, with blood dripping from his sword. He then demanded another head. One more volunteer came forward, and entered the tent with him. The Guru again emerged with blood on his sword. This happened three more times. Then the five volunteers came out of the tent unharmed. 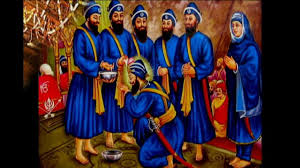 Panj Piare:
These five, who were willing to sacrifice their lives for their Guru, were called Panj Piare ("the five beloved ones"). These five volunteers were : Daya Ram (Bhai Daya Singh), Dharam Das (Bhai Dharam Singh), Himmat Rai (Bhai Himmat Singh), Mohkam Chand (Bhai Mohkam Singh), and Sahib Chand (Bhai Sahib Singh).
Guru Gobind Singh then took an iron bowl and poured some water in it. Sahib Devan (later Mata Sahib Kaur) added some sugar crystals to the water, and the Guru stirred this mixture with a double-edged sword whilst reciting the Five Banis. The resultant solution is called as "Khandey di Pahul" (ceremony of the double-edged sword) or commonly known as "amrit" (nectar of immortality)
These actions allude to the nature expected of the inductees to the Khalsa: that they must have the will and the strength to fight oppression (symbolized by the sword), but must always remember that their actions are born from protection and not hatred (symbolized by the sweetness of the sugar).
Each of the Panj Piares were given five handfuls of the Amrit to drink, and had amrit sprinkled in their eyes five times. Each time, they repeated the phrase "Waheguru Ji ka Khalsa, Waheguru Ji ki Phateh" ("The Khalsa belongs to Waheguru (the wondrous teacher), the victory belongs to Waheguru (the wondrous teacher)").[14]
Guru Gobind Singh gave them the title (analogous to "Knight" or "Sir" in English culture) of "Singh" (meaning "tiger"). Similarly, for female the title of "Kaur" (meaning "Princess"). It is noted that about twenty thousand men and woman took this baptism of steel on the first day.[15] Majority of Sikhs nowadays carry this title without taking the oath of double-edged sword.
Guru Gobind Singh is the "Father" of the Khalsa and Mata Sahib Kaur is the "Mother". One important outcome of joining the Khalsa is the abolition of one's previous caste, nation, race, rituals, customs, religion, clan, Karma. The new member is the citizen of Anandpur Sahib and their birthplace is the Keshgarh Sahib.[16]
The Khalsa is led by Panj Pyare or the five-beloved. At the Battle of Chamkaur, the Khalsa led by Panj Pyare passed on an order/command to the Guru Gobind Singh to escape from the Chamkaur and the Guru had to obey it, because at that point of time, and as proclaimed by the Guru on March 30, 1699 about his absorption into the Khalsa and declaring the five-beloved being equal to him, the Guru was just a Singh of the Khalsa.

The Khalsa needs to abide by the four restrictions set by Guru Gobind Singh and if a Sikh breaks one of these four restrictions they are excommunicated from the Khalsa Panth and must go 'pesh' (get baptized again). Guru Gobind Singh also gave the Khalsa 52 hukams or 52 specific additional guidelines while living in Nanded in 1708
Prohibitions:
The four prohibitions or mandatory restrictions of the Khalsa are:
1.   Not to disturb the natural growth of the hairs.
2.   Eating Kutha meat, meat of an animal slaughtered in the Muslim halal or Jewish kosher way;
3.   Cohabiting with a person other than one's spouse;
4.   Using tobacco or hookah.

Main article: Five Ks
The uniform of a Singh/Kaur of the Khalsa comprises the Five Ks:
1.   Kesh – Uncut hair on the face, head, and all parts of the body.
2.   Kanga - A wooden comb.
3.   Kara - An iron bracelet.
4.   Kacchera – A pair of drawers (a specific type of cotton underwear).
5.   Kirpan – A dagger or sword.
Five banies to recite in morning and evening Daily:
In the Morning: Japji Sahib, Jaap Sahib, Chopai Sahib, Shabad-Hajarey-Patshahi-Dasvi, Anand                          Sahib and Ardaas
in the Evening: Rehras Sahib & Sohela Sahib and Ardaas
These are for identification and representation of the ideals of Sikhism, such as honesty, equality, fidelity, meditating on God, and never bowing to tyranny, and for helping/protecting the weak, and self-defence.

Initiation into the Khalsa is referred to as Amrit Sanchar (water of immortality life-cycle rite) or Khande di Pahul (Initiation with the double edged sword). Anyone from any previous religion, age, or knowledge group can take Amrit (Amrit Chhakh) when they are convinced that they are ready.This baptization is done by the Panj Pyare in front of the Guru Granth Sahib. The devotee must arrive to the place of baptization, usually a Gurdwara, in the morning after bathing completely including having washed their hair and must be wearing the 5 articles of the Khalsa uniform. After baptization the new Singh or Kaur must abide by the four restrictions or must get re-baptized if they break any of them. Jasjpit Singh in Lucinda Mosher book describes taking Amrit as a huge commitment, "You are making a commitment to God, to God's creation, to yourself - and you're giving up yourself. It is like giving up your own ego and accepting God into your life - and accepting yourself as one with the entire creation.
PROUD TO BE A KHALSA
Posted by Unknown at 2:33 AM No comments: